Is Boris Johnson pushing the Tories members to Labour

Mr Bercow has described today's Tories as "reactionary, populist, nationalistic, and occasionally even xenophobic." Former UK House of Commons Speaker, John Bercow, who rose to international prominence as a referee in the country's political drama over Brexit, has announced his departure from the ruling Conservatives to join the opposition Labour Party. 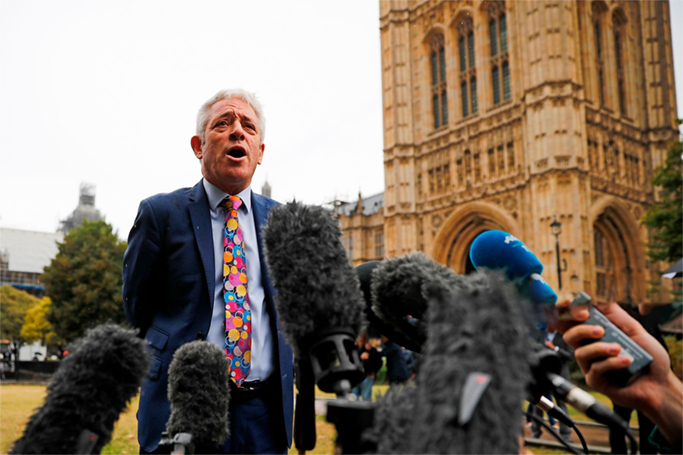 Mr Bercow was a Conservative MP for 12 years before being elected to the neutral position of Speaker in 2009, a position he held until 2019.

In a stunning attack on the prime minister, the former Speaker of the House of Commons claimed the Conservative Party has become “populist and nationalistic.” Mr Bercow, who frequently clashed with his own party, announced his defection by arguing that he is motivated by social justice. Mr Bercow went on to call Mr Johnson a “lousy governor” in another attack on the prime minister.

Mr Bercow, who stepped down as Speaker in 2019 after ten years, described today’s Conservative Party as “reactionary, populist, nationalistic, and sometimes even xenophobic.”

He stated that he joined the Labour Party a few weeks ago because he now shares its values and sees it as the only way to depose of the current Conservative government.

“I am motivated by support for equality, social justice and internationalism. That is the Labour brand,” he said.

“The conclusion I have reached is that this government needs to be replaced. The reality is that the Labour party is the only vehicle that can achieve that objective. There is no other credible option.”

“I don’t think he has any vision of a more equitable society, any thirst for social mobility or any passion to better the lot of people less fortunate than he is,” he said.

“I think increasingly people are sick of lies, sick of empty slogans, sick of a failure to deliver.”

He claimed that the Tories’ unexpected loss of the Chesham and Amersham parliamentary seat in a recent by-election demonstrated “considerable distrust on the part of voters in the south of England of this government.”

When asked if he thought Keir Starmer could lead the Conservatives to victory in the next general election, Mr Bercow said he was unsure.

“The jury is out. I am, however, hopeful because I observed Keir Starmer at close quarters from the Speaker’s chair. He may not be Bill Clinton or Barack Obama, but he is decent, honourable and intelligent and he came into politics as public service.

“I believe that he is motivated by an earnest and consuming desire to better the lot of the vast majority of the people of this country who do not enjoy the privileges that he does.”

Former Conservative MP and Commons Speaker John Bercow stated that his decision to defect to the Labour Party is “not personal against Boris Johnson.”

Mr Bercow told Sky News that his decision to leave the Conservative Party has nothing to do with the prime minister, but that Mr Johnson has “only a nodding acquaintance with the truth.”

Mr Buckland also accused the former Speaker of having diminished his influence by coming out in support of Labour.

The justice secretary told Sky News, “I think him joining a political party actually has the effect of diminishing the force of his voice in politics, however strong he wants it to be”.

On the other hand, such actions are a reminder of similarities with the last US president, Donald Trump. Both the prime minister and the president of the US are unprincipled demagogues who have undermined democratic standards. Fundamentally, both are populist, snake-oil salespeople and unprincipled demagogues who came to prominence by exploiting the frustrations of the underprivileged with promises they knew they could never keep and cures they knew would never work (Johnson did, of course, deliver Brexit and end free movement, but hardly the sunlit uplands he pledged).

Trump vowed to “make America great again,” while Johnson claimed to free the United Kingdom from the EU’s stifling chains. Trump pledged to “construct a wall” to keep immigrants out, while Johnson promised to “regain control” of immigration policy. Trump vowed to withdraw the US from supranational alliances, while Johnson threatened to withdraw the United Kingdom from the European Union. Both candidates vowed to raise, not lower, the metaphorical drawbridge, therefore unleashing their respective countries’ darker, xenophobic, and isolationist tendencies.

In many respects, they have ruled similarly, albeit Trump is far more heinous. Both engage in tribal politics, or politics of division. Both incite rage against a political elite that they depict as corrupt. Both indulge in nasty jingoism and call their opponents’ patriotism into doubt.

Both violate democratic norms and traditions, and they are resentful of constraints on their authority. Regardless of merit or aptitude, both surround themselves with servile adherents. Both give favours to friends in the form of jobs, pardons, peerages, or lucrative government contracts. Both show little regard for the rule of law. Both attempt to stifle genuine inquiry from elected officials and the mainstream media.

“Both attempt to subjugate or co-opt ostensibly autonomous institutions”

Both guys have low ethical standards and a skewed view of what is right and wrong. Both regularly indulge in exaggeration and plain deception. Both are slackers with short attention spans. Both are showmen who favour simple phrases and attention-grabbing statements over long-term policymaking. One thinks that both are more concerned with power than with the plight of blue-collar people.

According to Lisa Nandy, the shadow foreign secretary, Johnson and his ministers “were so keen to swallow the Trump playbook of how politics should be done that they abandoned British principles, interests, and their own self-respect,” the Observer reported on Sunday.

Forsyth is correct. For all of the aforementioned reasons, Johnson is not Trump, and there are additional significant contrasts worth emphasising. Johnson is an egotist, but not as insane, deluded, or borderline psychopath like Trump. It is difficult to see him ever condoning a real invasion of the Commons or defying a legal election outcome. Despite Brexit, he is neither protectionist nor isolationist. He appears to be concerned about climate change. He is not as blatantly evil, and he possesses both charm and humour, whereas Trump has never laughed.

However, it remains to be seen whether, as a leader, he has done more long-term harm to his country. The immense damage Trump has inflicted on his nation may yet be substantially recoverable. The enormous harm Brexit would inflict on the UK economy, national cohesiveness, and global influence is unlikely to be reversed.

The iPhone 13 Appears to Impact Apple Europe Sales in 2022

The unprecedented increase in food poverty in the UK

The iPhone 13 Appears to Impact Apple Europe Sales in 2022

The unprecedented increase in food poverty in the UK

The European economy is affected by the Ukraine-Russia war